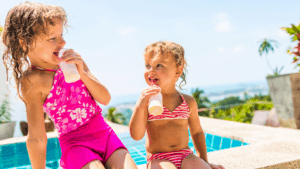 The findings of the researchers, which were published in the Journal of Clinical Nutrition, also found that the rate of absence from childcare centres due to infections was lower in children receiving LGG in comparison to those who were not.

According to UNICEF, a global average of 16 per cent of children under five suffer from acute respiratory infections.

The team behind the research explained that while the efficacy of probiotics in the prevention of infections in children who attend day care centres has been investigated in several studies, these have yielded contradictory results, and thus further studies are required to evaluate their efficacy.

The researchers said the objective of their study was to investigate whether LGG administration could play a beneficial role in the prevention of both gastrointestinal and respiratory tract infections in children who attend day care centres.

They said that they undertook a randomized, double-blind, placebo-controlled trial in 281 children who attend day care centres in Zagreb, Croatia.

The scientists stated that the children were not allowed to consume any other product containing probiotics or prebiotics during the intervention, and they reported that the study started in November and finished in February to coincide with period when the majority of infections occur.

They added that the milk products were tested every two weeks to prove stability and concentration of the LGG, and both the research staff and children were unaware of the real nature of the product.

Moreover, the study investigators said that every ten days contacted parents to find out whether their child had developed any infections or side effects: “Infections were diagnosed by local general practitioners, who were responsible for the care of each child. They were asked to record details of all infections that the child experienced during the intervention period.”

However, they noted that there was no risk reduction in regard to lower respiratory tract infections as a result of the consumption of the LGG.

The researchers also noted limitations to their study in terms of the fact that diagnosis and treatment of then children was based on clinical judgment, and secondly the rate of severe infections was very low and, therefore, no clear effect of LGG could be proven.

They also reported that as they study was conducted during the winter period, the season (summer) with highest risk of gastrointestinal infections was missed.