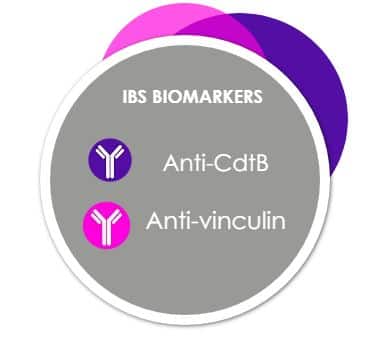 These markers are known to be elevated in a majority of patients with IBS-D or IBS-M and indicate the cause was gastroenteritis.

(+ Additional fee for blood draw at your local lab)

This is a single blood sample, drawn at your local community lab, that is assessed for elevated anti-vinculin antibodies are specific for irritable bowel syndrome (IBS) compared to inflammatory bowel disease (IBD), and an increase in anti-vinculin antibodies with respect to anti-CdtB increases that specificity. If you have chronic IBS, or small intestinal bacterial overgrowth (SIBO) that keeps relapsing, it can be helpful to know if you have elevated levels of these antibodies, so a long-term management strategy can be developed.

Post-infectious IBS can set in after having a gastro bug caused by bacteria, virus or parasite infection. It seems likely that such infections may cause changes in the lining of the intestines, increases in intestinal permeability, changes in the normal motility of the intestines (possibly due to damage to the gut nerve cells), increased immune response and inflammation, poor absorption and/or alterations in the function and activity of digestive enzymes.

Common gastro bugs, such as Campylobacter jejuni, E coli, Giardia lamblia, Shigella, and norovirus are linked to increased risk of post-infectious IBS, but other types of bacteria and viruses also have been implicated. The chronic post-infection problem arises due to a toxin that the bacteria produce, called cytolethal distending toxin-B (CdtB). This toxin triggers the immune system and it reponds by making antibodies - specifically anti-CdtB and antivinculin. Vinculin is a protein of nerve cells that line the gut, so the antibody attacks these, causing alterations in motility.

ibs-smart™ is a blood test you can take to detect the IBS biomarkers, anti-CdtB and anti-vinculin antibodies.
​
These markers are known to be elevated in a majority of patients with IBS-D or IBS-M and indicate the cause was gastroenteritis.

Test fee includes: Shipping (FedEx) to the USA, and the laboratory and handling fee. An additional $44.50* is payable at your community lab (cost subject to change). Results available via your nominated health consultant.

ibs-smart™️ is brought to you by Gemelli Biotech, via The Auckland Gut Clinic. Learn more about the lab: www.gemellibiotech.com. 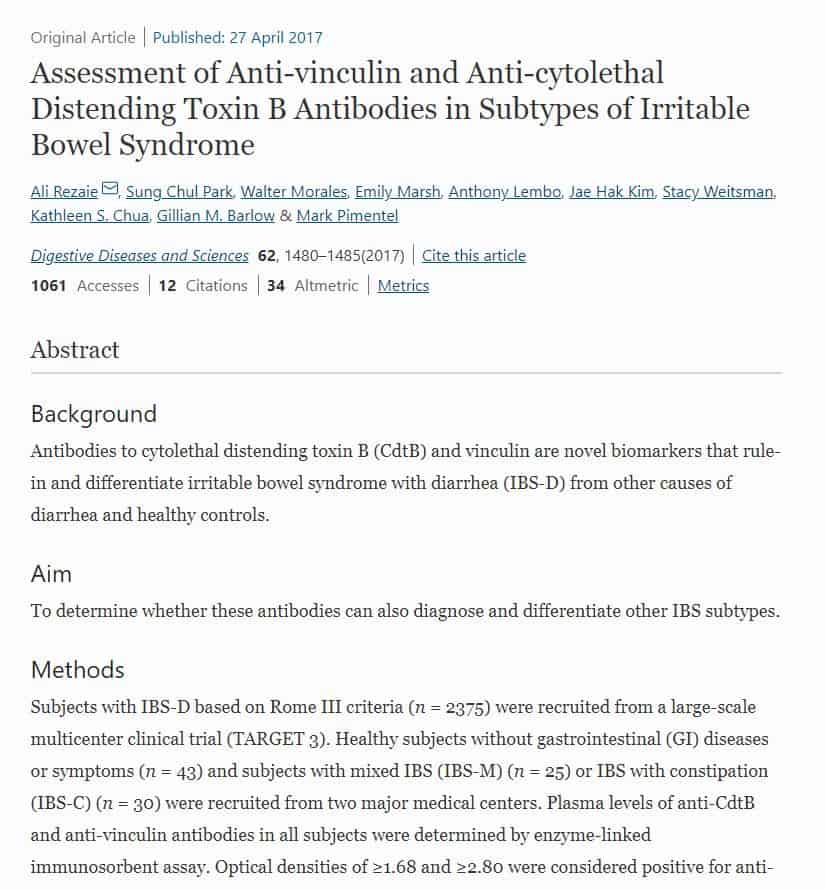 "Conclusions Anti-CdtB and anti-vinculin titers and positivity rates differ in IBS subtypes, with higher antibody levels and positivity rates in IBS-D and IBS-M, and lower levels in IBS-C subjects that are similar to those in healthy controls. These antibodies appear useful in the diagnosis of IBS-M and IBS-D, but not IBS-C. Furthermore, these findings suggest that IBS-C is pathophysiologically distinct from subtypes with diarrheal components (i.e., IBS-M and IBS-D)." "These results confirm that anti-CdtB and anti-vinculin antibodies are elevated in D-IBS compared to non-IBS subjects. These biomarkers may be especially helpful in distinguishing D-IBS from IBD in the workup of chronic diarrhea."