Molecular hydrogen – a preventative and therapeutic gas with many uses.

Since its discovery as an antioxidant in 2007, multiple studies have shown numerous beneficial effects of molecular hydrogen, sometimes refered to as Miracle Water. In chemistry molecular hydrogen is expressed as H2.

Please scroll down to see the Scientific References for everything on this page.

Molecular hydrogen is an important anti-oxidant

A free radical is something that can cause a cell damage. We encounter these in our daily lives; examples range from the food we eat, the exercise we do as well as more obvious ones like cigarette smoke and petrol fumes.

Free radicals react negatively with the cells of the body and can damage our DNA, RNA, proteins, fats, cell membranes, cause cell death and aging , and are linked to every disease (e.g., neurological disorders, inflammatory disorders, cancer, diabetes and more). By neutralising these oxidants, an antioxidant prevents damage.

Unsurprisingly, we are always in search of effective and easy to administer antioxidants! However, it is important to realise that some types of (low level) oxidative stress is beneficial.

Free radicals in your body that are part of a signalling defence mechanism called REDOX. By sending out signals, damaged and stressed tissue can recruit the help it needs for repair. If this is turned off indiscriminately, then repair mechanisms may not work.

The role of H2 as a highly selective antioxidant is what has gained it the most attention. Molecular hydrogen can only neutralise the most harmful (never beneficial) radicals, called hydroxyl (OH–).  Hydroxyl is not part of the redox signalling pathway. It serves no purpose at all than to damage the tissues inside you.

Nothing is immune from the hydroxyl attack.  Enter the role of molecular hydrogen, which can reduce oxidative stress and improve redox homeostasis. This process is partly mediated via what is called the “Nrf2 pathway”, which regulates levels of glutathione, superoxide dismutase, catalase, and other compounds that are formed in the body to prevent and counteract oxidative damage.

Because molecular hydrogen can penetrate the cell membrane and reach the cell’s central information center (nucleus) it is able to neutralise these oxidants and prevent damage to the DNA (genetic information).

What is unique about molecular hydrogen is that no amount has been found to be harmful. The product of its antioxidant action against hydroxyls is water (H2O), which the body can excrete easily and safely.

Read the Molecular Hydrogen Foundation’s “Dummies Guide to Hydrogen” if you want a deeper understanding of the chemistry!

Like oxidants occurring easily and frequently in our bodies so too can inflammation if left ‘unchecked’. We encounter inflammation from illness, infection, the foods we eat, the foods we don’t eat (but should), as part of the aging process and even stress.

Molecular hydrogen inhibits the oxidative stress caused by tissue injury and may enhance healing via this action.

Apoptosis means ‘cell death’. This is a normal process within the human body that helps in the control of aged and aberrant cells. However, sometimes abnormal apoptosis occurs, which is not desirable. Molecular hydrogen has been shown to exert anti-apoptotic effects by increasing or decreasing apoptosis-related factors. Pretty clever!

Because of the ability of molecular hydrogen to penetrate the blood-brain-barrier extensive studies have been performed on central nervous system diseases such as Parkinson’s and Alzheimer’s disease.

In addition to actual neurodegenerative diseases, H2 also appears to alleviate brain injuries and stress or age-related impairment. For example, and investigation in stressed and depressed mice, has shown that hydrogen water can restore the natural growth of brain cells. It is thought that hydrogen water may be able to improve depression and other mood disorders.

Consuming hydrogen-rich water has potential to prevent cognitive and stress-induced disorders and more research is underway. 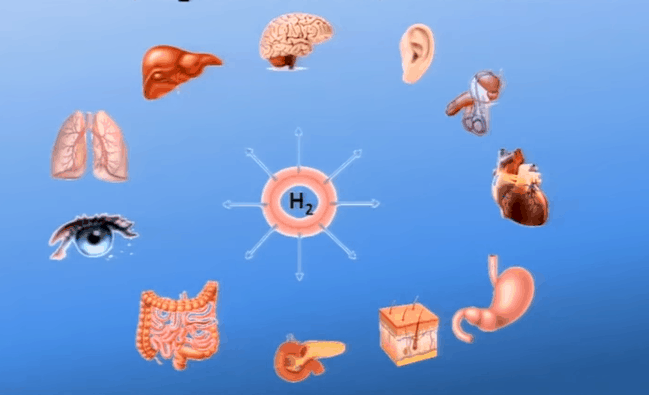 Evidence indicates that treatment with molecular hydrogen protects against injury to the heart, the development of atherosclerosis and other vascular diseases.

Liver inflammation caused by both parasites and chronic hepatitis B was helped by molecular hydrogen – most likely due to its protective antioxidant and anti-inflammatory actions.

Beneficial effects have also been shown in other liver diseases such as cancer, obstructive jaundice, medication-induced liver damage (including paracetamol and fatty liver. disease)

The antioxidant properties of molecular hydrogen have a place in this condition, as metabolic syndrome is associated with oxidative stress.

Molecular hydrogen has also been shown to reduce bad cholesterol (LDL), which is commonly raised in the metabolic syndrome.

Drinking H2 water just before exercise was shown to produce anti-fatigue and endurance effects. Further, it has been proposed that it may reduce the harm from noxious exercise – possibly due to it’s action as a therapeutic antioxidant, working directly or indirectly by inducing anti-oxidative enzymes.

How do we get Molecular Hydrogen?

Actually all humans are designed with on-board hydrogen generator!

YES! Nature did supply us with a means of getting molecular hydrogen continually. Not surprisingly, this is an important role of our gut microbes. As the bacteria in the colon ferment the residual fibre and starch from our food, they produce H2, which is appears to work as an antioxidant both locally and systemically, as it is readily absorbed into the blood stream and circulated throughout the body.

However, in the era in which we live, it is all too common for our gut flora to have shifted a long way from the ideal balance which helps to keep us healthy.

Much of the medical research going on currently is around the role of gut bacteria and various health outcomes and the results are astonishing. Which ever way we turn, it seems our gut bacteria are there, playing a key role in most problems.

Most people need more than their body can make (depending on the free radical exposure) and many people with health challenges have an imbalance in their gut bacterial populations, reducing their endogenous hydrogen production. Clearly this needs to be addressed as part of a health management strategy.

Measurements of gut-hydrogen production are possible with a hydrogen breath test. The results guide correction of the balance of gut bacteria and supporting the growth of hydrogen-producing bacteria in the colon.

Other strategies focusing on antioxidant therapy should be centred around the way they interact with the gut. For example dietary turmeric, long revered as an antioxidant but poorly absorbed, has been shown to result in increased hydrogen production by gut bacteria – perhaps this is the main way it works!

However, some research suggests that for therapeutic benefit, it is better to get supplemental molecular hydrogen. This is possible by several means, including inhaling the gas, drinking hydrogen-infused water, soaking in a hydrogen infused bath, injecting hydrogen saline into the veins and using hydrogen drops in the eyes.

This is by far the most practical way for most people to get supplemental molecular hydrogen. Studies have indicated that drinking hydrogen-water and intermittent exposure was more effective than continuous exposure to molecular hydrogen. You can purchase your own portable hydrogen-rich water generator here or a larger unit suitable for the whole family. Simply add your water to the generator, let it run for a cycle (or give it an extra boost with 2 cycles) and drink the water. That’s it. That’s all you have to do.

For some people this is a direct way to get the molecular hydrogen to the damaged tissue. Our portable hydrogen generators have an adaptor for inserting nasal prongs for breathing in the gas.

How is water enriched with hydrogen to become Miracle Water?

Plain or conventional water (e.g. tap, filtered, bottled, etc.) contains less than 0.0000002 ppm of H2, which is well below the therapeutic level. Research indicates a target of 0.8 – 1.6ppm dissolved hydrogen in water for the best effect.

By splitting water (H2O), using electrolyis the result is 2x H2  and O2.

Our units all have a proton exchange membrane (PEM) and use solid polymer electrolysis (SPE) to produce pure hydrogen water without ozone, chlorine or harmful oxides. We have independently tested our units to ensure that they meet the minimum production level of 0.8ppm dissolved hydrogen. In some cases you can get the level even higher. 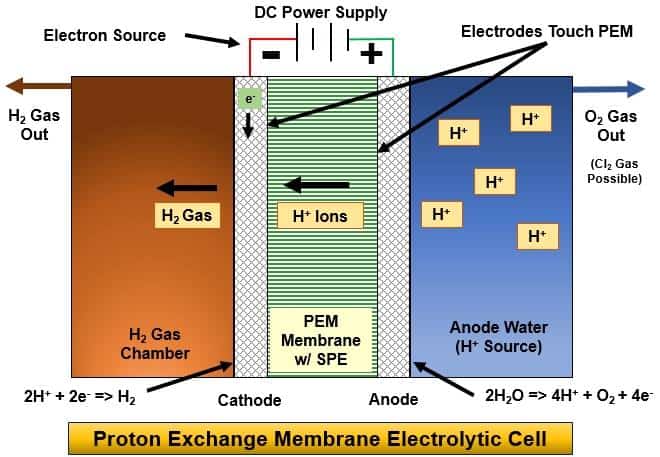 In summary, the main advantages of consuming hydrogen water are that it:

For loads more science and other such stuff, go to the Molecular Hydrogen Institute

No question, the research is building fast. In 2007, the journal Nature Medicine first published data on molecular hydrogen. More than 300 additional articles have been written in legitimate scientific journals since then. Here are just a few:

Got a question? Contact us. Sharon Erdrich has MolecularHydrogenCertificationL1 from the Molecular Hydrogen Institute. 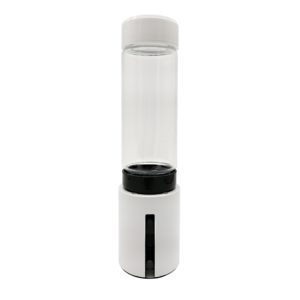 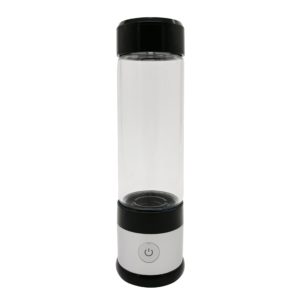 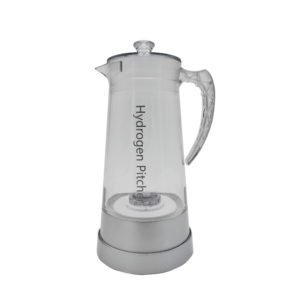