While vegetarians and raw foodists rely on plant-based sources of omega 3, it is clear that there is a percentage of the population that cannot metabolise the plant forms into the biologically active forms that are readily available from sea food – these people particularly benefit from supplemental omega 3. 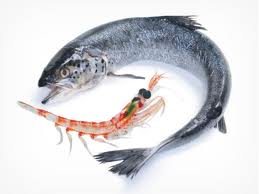 A commonly asked question is: “Is Krill oil a better way to get my Omega 3?” To answer this properly I need to address the broader issues, and I hope that the following information achieves this. Krill is a tiny shrimp-like crustacean that forms the basis of the Antarctic marine ecosystem – it is the food for most species in the southern oceans, including whales, seals, penguins and albatross.  Krill has been harvested for many years to provide food for making fishmeal for feeding to chickens and pigs as well as farmed fish. The population of krill normally fluctuates with the sea-ice changes (krill feed on algae that form under the ice) but the numbers of both krill and krill-dependent Adelie penguins in the West Antarctic peninsula are declining.  While the harvesting of krill has apparently been carefully monitored by the Commission on the Conservation of Antarctic Marine Living Resources (CCAMLR), harvesting is taking place in the main feeding grounds of whales and penguins and Greenpeace challenges the management regime of the CCAMLR. In 2010 part of the krill-catch area was closed by the CCAMLR due to the quota having been reached. There are a number of research articles on the benefits of krill oil – all of which are done by those with a vested interest in krill, and few of which are comparing krill with fish oil.  If you look at the studies, they are all coming up with the same health benefits associated with fish oil!   Plus, the advocates of consumption of krill oil are often selling krill supplements and they debunk conservationists concerns by stating that krill compose the largest biomass on the planet and that the annual harvest is sustainable as it is a minute percentage of the resource, of which only a small percentage is used for krill oil production.
However, a declaration of “certified sustainable” is not a guarantee – one problem in the industry is the sheer number of certifying agencies, and another being that there is no universally accepted definition of “sustainability”.

An article in 2012 in National Geographic magazine reported on a survey by marine researchers who found that there was very little krill, scarcely any icefish (a species that depends on krill) and that Gentoo penguins were “struggling and not feeding their chicks normally” – all due to insufficient krill.   So just how sustainable is krill for either fish, chicken or human supplements? Additionally, the effects of climate change have caused Antarctic krill populations around the South Shetland Islands near the tip of the Western Antarctic peninsula to plummet between 40 to 80 percent over the last 30 years according to research published in The Proceedings of the National Academy of Sciences. Other statements made to attempt to make you feel better about taking fish oil include “has an antioxidant potential 48x that of fish oil” – however this may be due to the vitamin E and rosemary extract that gets added to prevent the krill oil from oxidising.  While sardines and anchovies generally yield in excess of 80% fat, krill is less than 5% fat which means the oil degrades  – or oxidises – much more quickly, requiring either specialist equipment on-site of the harvest or the addition of antioxidants (such as rosemary extract) to the oil. Krill oil contains between 180 & 240mg omega-3 per 1000mg of oil; most fish oils contain 300-550mg/1000mg.  In a study in which a group of people where supplemented with krill oil – with 543mg DHA+EPA – per day, and some weeks later, the same group of people were given fish oil – delivering a total of 864mg of DHA+EPA – the result in terms of levels of inflammatory and oxidative stress markers were the same. (Lipids 2011)
Undoubtedly krill is a valid source of omega-3 which is more absorbable that fish sources.  However, until the fishing of krill is more sensibly spread (ie. not focused in the feeding grounds of the species that rely on it for food) and missing information (such as the number of adult krill required to sustain the population) and the effect of climate change on krill populations is known, it is probably sensible to simply continue with your fish oil and stop eating krill-fed farmed salmon.

Considering the much higher price for krill oil (milligram for milligram, krill oil can cost up to 10 X more than regular fish oil)…the potentially small increase in bioavailability may not be worth the planetary cost in the long term. References: Lipids 2011, vol 46 pp37-46 http://www.asoc.org/storage/documents/Meetings/CCAMLR/XXX/unhappy_feet_cc-xxx-bg-21.pdf NY Times: http://www.nytimes.com/2012/03/13/science/tracking-antarctic-krill-as-more-is-harvested-for-omega-3-pills.html?_r=0 Kenneth Brower (2013) Life in Antarctica Relies on Shrinking Supply of Krill, National Geographic, Aug 17 Online The Proceedings of the National Academy of Sciences: http://www.pnas.org/content/108/18/7625.full http://www.naturally-u.com/uploads/downloads/FishOilvsKrill.PDF http://www.vitguide.com/krill-oil-vs-fish-oil/