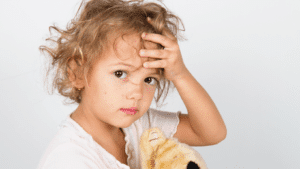 Measles and the Vitamin A Connection

Measles (English) is caused by an airborne virus that enters through the nose and throat. It can also be contracted by touching the infected person or something they have touched.

Symptoms usually begin with a dry cough and low grade temperature, which increases over the next 5 days when a rash then breaks out and coughing increases. A red rim may form around the eyes, accompanied by neck and head pain, sensitivity to light and small white spots inside the mouth.  The characteristic rash usually starts below the hairline and behind the ears and then spreads over the whole body in the following 36 hours. The spots of the rash can merge together and usually fades in 3-4 days.

The patient is very contagious for about a week, starting 3-4 days before the rash actually appears.   Treatment generally is plenty of rest, to keep cool and dry, and drink lots of nourishing fluids.

The vast majority of children who contract measles (or most childhood diseases) will have no serious complications, especially if they have been eating a nutritious diet and leading healthy lifestyles.

Current evidence suggests that the severity of measles or complications following the illness, are greatly related to the child’s nutritional state and, in particular, Vitamin A deficiency, and in fact, the World Health Organisation (WHO) have recommended a rather high, short-term supplementation with Vitamin A for measles since 1987 in populations that have deficiency -commencing at the time of diagnosis.

Paediatric Nursing details a study undertaken in Wisconsin, which found that 72% of children with measles had deficient levels of Vitamin A, and the more severe the deficiency the more severe the illness and the complications.  Another (New York) study analysing children less than two years of age with measles, showed that 22% were deficient, and another 26% were borderline.  The more deficient a child, the lower the level of measles-specific antibodies, and the higher morbidty and mortality.

Although Vitamin A (also known as Retinol) is found only in foods of animal origin (ie. liver, milk, eggs).   Red, orange and yellow fruits and vegetables contain compounds (carotenoids), that can be converted into vitamin A by your body when the right co-factors are also present.  It takes 6 units of carotenoids to make one unit of Vitamin A.

While vitamin A is best known for its vital role in vision, especially night vision, it is also important for the immune system, normal tissue growth, as well as reproduction and bone development.

A clinical sign of Vitamin A deficiency is photophobia, meaning “sensitivity to light’.  Other deficiency signs are frequent viral infections, goose bump-like appearance of the skin, impaired vision in dim light and in prolonged or significant deficiency, night blindness.

However, if one is found to be Vitamin A deficient, they are also considered to be at high risk for other nutritional and health problems.

Vitamin A Deficiency in NZ Children?

In the NZ Children’s Health & Nutrition Survey, conducted in 2002, vitamin A deficiency was one of the main findings.  Considering that deficiency of this vitamin is a recognized risk factor for severe measles infections, especially in under-two-year-olds, it makes sense to make sure your children get some.  Contact us to find out the best source for your children.