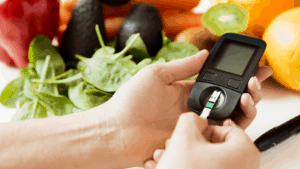 … also referred to as Insulin Resistance

Take the test – could you have Metabolic Syndrome?

If you have metabolic syndrome you will usually have one of the following disorders:

And two or more of the following:

Part of the Syndrome X profile includes an earlobe crease appearing at a 45-degree downward angle toward the shoulder and an elevated waist to hip circumference.

Take the test – could you have Metabolic Syndrome?

Episodes of low blood sugar levels (experienced as feeling faint or weak, rectified by eating), carbohydrate intolerance, sugar cravings, sleepiness after meals, insomnia (relieved by snacking), adult acne, and central abdominal obesity are all indicators of insulin excess. Abnormalities on a blood test and a slightly raised blood pressure are commonly observed in adults with high insulin, elevated insulin levels may start in childhood, particularly in the overweight youngster with abnormally high cholesterol

Studies have suggested that genetic factors may determine how insulin is handled in the pancreas and liver of some people. This, in turn, may influence the risk of developing insulin resistance and diabetes, especially in ethnic groups. There is also a higher risk in postmenopausal versus premenopausal women. It is felt that one or two risk factors exert an effect in a particular group, thus influencing the course of metabolic syndrome.

The prevalence of the metabolic syndrome in children increases with the severity of obesity and reaches 50 percent in severely obese youngsters.

Key factors include obesity, stress and lack of physical activity as well as insulin resistance – which usually is the direct result of obesity.  Your emotional health may influence the onset and ongoing symptoms associated with metabolic syndrome. Hostility, aggression, anger, etc. have been shown to correlate with other unhealthy lifestyle habits, such as poor diet and lack of exercise.

The risk of insulin resistance also increases during pregnancy, and is thought to have a cumulative effect with subsequent pregnancies.

Family history: if includes heart attacks, hypertension, and Type II diabetes, the likelihood of being insulin resistant increases. It appears about 50% of the variability of insulin may be due to genetic propensities; the other half seems related to lifestyle. Some researchers speculate that the genetic link may also be strongly influenced by mimicry. Offspring may (in fact) be mimicking the poor eating habits of parents, producing another generation plagued by obesity, insulin insensitivity, and diabetes.

Stage of Life: A recent Australian study tracked the metabolic health of 265 women aged 46-57 for five years as many of them progressed through menopause. The study found that a surprisingly high percentage of these women – nearly 1 out of 6 – developed impaired fasting glucose levels during this time.

During the menopause transition, more fat often starts to accumulate around the stomach and insulin levels begin to inch upwards. This subtle change can trigger a drop in levels of sex-hormone-binding-globulin, (normally attaches to sex hormones and makes them inert). With reduced SHBG levels, greater amounts of bioactive “male” sex hormones – androgens such as testosterone – begin to circulate inside a woman’s body.

All of the factors associated with metabolic syndrome are interrelated.

Obesity and lack of exercise tend to lead to insulin resistance.

Insulin resistance has a negative effect on lipid production, increasing VLDL (very low-density lipoprotein), LDL, and triglyceride levels in the bloodstream and decreasing HDL. This can lead to atherosclerosis which, over time, can lead to cardiovascular disease, blood clots, and strokes.

Insulin resistance also leads to increased insulin and glucose levels in the blood. Excess insulin increases sodium retention by the kidneys, which increases blood pressure and can lead to hypertension.

Chronically elevated glucose levels in turn damage blood vessels and organs, such as the kidneys, and may lead to diabetes.

How is it Diagnosed?

Presence of two or more features as outlined above. In addition, the following tests are usually done:
Glucose, insulin, cholesterol, uric acid

Can it be Prevented?

YES!
Achieve and maintain a healthy weight (click here to see how) and exercise regularly

In children and teenagers part of the increased risk is due to:

Parents need to guide children to develop healthy eating habits, moderate computer or “screen” time and make sure that they get outside and play!

Successful management of the metabolic syndrome involves strategies that address each of the individual components of the condition (e.g., high blood pressure, high cholesterol and obesity).

The goal is to improve indicators without worsening another aspect condition. For example, some anti-hypertensive drugs (e.g., diuretics and beta blockers) increase the risk of elevated blood glucose and insulin resistance.

Medical drugs may include:

Advantages & Disadvantages of this approach

Main goals are reduction in markers of the disorder. However in practice (from my observation) doctors are generally not very pro-active in supporting their patients to do the single most important thing – lose weight. Thus the treatment is a long-term maintenance regime. Along the way, the cocktail of medications increases, with more being added to control side effects that arise. One big risk of statin therapy would appear to be the negative effect it has on the body’s CoQ10.

Statins block enzyme pathways involved in the production of cholesterol, thereby lowering cholesterol levels.The same enzymes that are involved in the production of cholesterol are also required for the production coenzyme Q10 the levels of which are lower in those taking statins. Coenzyme Q10 (ubiquinone) is important in the manufacture of ATP. Present in every cell, it is especially concentrated in the very active cells of the heart. Low levels of CoQ10 are implicated in virtually all cardiovascular diseases, including angina, hypertension, cardiomyopathy and congestive heart failure.

Diet, herbs and nutritional supplements are carefully matched to the individual.  Specific nutrients that may be indicated to help improve insulin and glucose metabolism, provide antioxidants, manage blood pressure, support healthy cholesterol levels, reduce stress and to counteract depletions and side effects of prescription medication.  Managed weight loss is central to treatment as well as implementation of an exercise regime to enhance the body’s ability to utilise glucose more effectively.

Do You Have Insulin Resistance ?

Take the following quick quiz to assess your risk for insulin resistance.

If three or more of these statements apply to you, then you might have insulin resistance.  We strongly recommend an appointment with one of our naturopaths as soon as possible to get you back on the path of good health.  Prevention of full-blown Metabolic Syndrome is the best strategy, and it’s never to late to start to turn back this potentially life-threatening condition.