We live in unsettling times – a global pandemic, lock-downs, being cut off from our usual social networks, and adapting (again) to different ways of doing things. Feeling worried or concerned in this situation is a completely normal response to a stressful situation. It’s good to know this, as well as what common herbs you might have access to that may help to reduce these feelings and promote inner calm.

Here are nine home remedies for anxiety – find them in your garden, kitchen, local park or supermarket – to help you cope with worrisome thoughts.

Lavender is #1 on our home remedies for anxiety list. Not just because most people know it but because lavender may help with reducing levels of stress and anxiety.  Lavender has also been studied better than many other herbs. In aromatherapy, lavender oil is used to support reducing stress, anxiety, restlessness, depression, and to help promote better sleep.

While a formulated product of lavender oil was found to be as effective as anxiolytic medication in people with anxiety disorder, you can also make lavender tea.

Put 1-2 teaspoons of Lavandula angustifolia (that’s English lavender) flowers into a teapot with one cup of boiling water. Let it brew – the longer the better! For added power, pop in some lemon balm as well (see next section).

If you’ve got lavender essential oil, first check that it’s Lavandula angustifolia (other types have a different natural chemistry and are not recommended for this).

Have yourself an old-fashioned steam inhalation: add 1-2 drops of Lavandula angustifolia essential oil to a bowl of boiling water. Cover your head with a bath towel and breathe the lavender-steam, slow and deep. You can also put lavender essential oil in your bathtub (you’ll need 5-6 drops though).

Inhalations of lavender have been demonstrated to help decrease heart rate, blood pressure and cortisol levels. And may also help to reduce those worrying thoughts.

At bedtime, you can add up to 3 drops of the essential oil to an electric diffuser (no candle-powered ones at bedtime please!). If you don’t have a diffuser, put 1-2 drops of lavender oil on a cotton ball and pop it inside your pillowcase, so you inhale it as you go to sleep.

If you’re inclined to feel worried during the day, make up a lavender roll-on:  10mL of sweet almond or jojoba oil and 5 drops of Rich Earth Lavender Fine. Carry it with you and apply just below the neckline and to your wrists two-three times during the day. For a stress-relieving body rub, a 2% concentration is recommended. Source 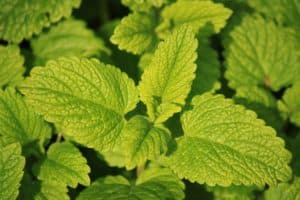 Also known as Melissa or bee balm, Melissa officinalis is mildly sedating, so it’s perfect to use if you notice that your thoughts make it hard to get good sleep. For extra punch, blend with lavender (see above)

Lemon balm is an easy-to-grow garden herb, and while it dies down in winter, you can harvest and dry it when it is at its peak in summer. Brew into a delightful lemony tea – again, the stronger the better. Drink it during the day (hot or as a refreshing iced beverage) and before bed.

Research has shown that lemon balm helps by decreasing the action of an enzyme that breaks down one of your natural “foot-on-the-brake” brain chemicals (GABA). 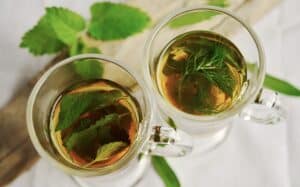 A study from 2014 demonstrated that supplemental lemon balm had significant reductions in anxiety and associated symptoms, and modulation of cortisol levels. An earlier study found this, as well as showed it effective to reduce insomnia. It’s best to use for at least two weeks before deciding how much it helps you.

You might prefer to use Rich Earth Melissa officinalis essential oil. Melissa has a very low oil yield, so it is very precious (and commonly adulterated with cheaper “smell-alikes”. To improve affordability, we offer a 10% blend with  pure organic jojoba oil. Fantastic to use as a chest rub or spot treatment when you need it. 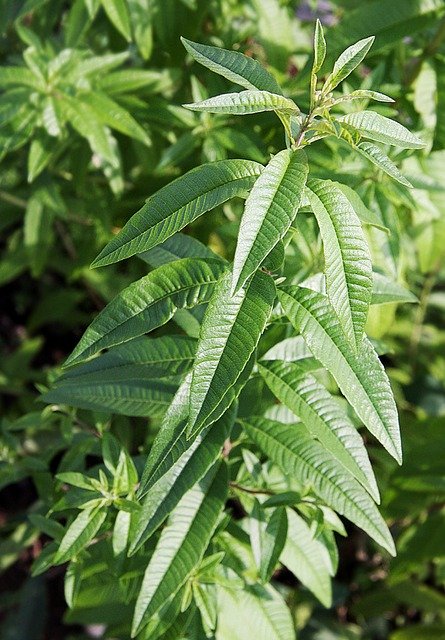 Another lemony herb that is useful to support those prone to worry is lemon verbena (Lippia citriodora). You may know it as vervain, another common garden plant and easily made into a refreshing herbal tea.

A study in mice showed that lemon verbena reduces anxiety and induces a sense of calm. It also works as a muscle relaxant. The mechanism is slightly different to that of lemon balm; it attaches to the GABA receptor and may also help to settle ans support the digestive system.

Brew lemon verbena into a nice strong cuppa – add fresh or dried leaves to your teapot (or saucepan) and let sit (or even simmer) for a good 10-15 minutes to extract the goodness. In summer, let it go cold and serve iced for delightfully refreshing beverage.

TIP: Lemon verbena is easy to grow in your garden. It loses its leaves in winter, so harvest in summer and dry in a dehydrator or by hanging the cut branches to dry.

Who would have thought the humble cabbage would be on the list of home remedies for anxiety?

Yes, you can make your own GABA! Cabbage is a rich source of an amino acid called glutamine, which is the starting-protein for making GABA. Glutamine is highest in red cabbage, but is damaged by cooking, so make coleslaw or sauerkraut (which is fermented cabbage).

As well as containing glutamine, both probiotic and “post-biotic” properties of fermented foods help with modulating the gut environment, which is an important for local serotonin production, calming the gut. 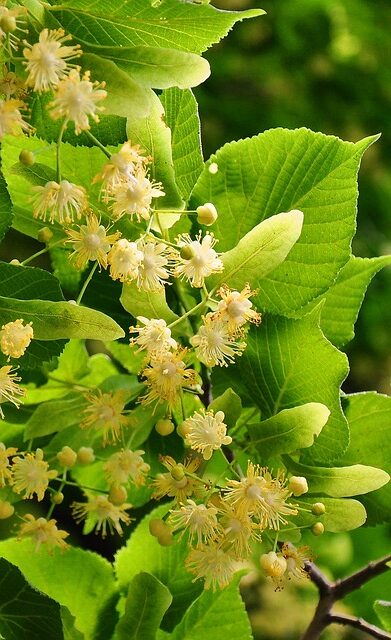 Not to be confused with the flowers of the citrus limes, the European linden tree, (Tilia cordata), can be found in some gardens and parks in New Zealand. It is a deciduous tree with distinctive heart-shaped leaves and fragrant, delicate yellow flowers. The active ingredients in linden have been shown to reduce anxiety in mice. It’s mode of action may also be by activating GABA receptors.

Linden blossom has also been used traditionally to support the immune system’s fight against infection. It is listed by Germany’s herbal regulatory agency (“Commission E”) for the treatment of colds and coughs. So this may well be the perfect herb if your worry comes on or is increased when you are unwell.

If you have access to a linden tree, harvest the flowers when it blossoms in late spring. With luck you’ll have a good supply of a fabulous anxiolytic herbal tea for the year ahead. And it may also provide some immune support. 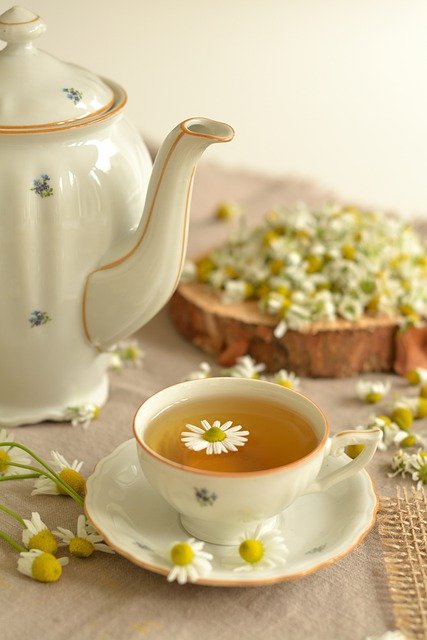 Chamomile (Matricaria chamomilla) is one of the most widely used herbal remedies in the world. No wonder its in our top 9 home remedies for anxiety.

Chamomile is included in the pharmacopoeia of 26 countries, with a long traditional use as a calming nervine and digestive carminative. Including for children.

In one study in adults with anxiety, German chamomile resulted in lower anxiety scores and better psychological well-being. Changes in cortisol levels were associated with improved symptoms. They took 3 capsules daily, each the equivalent of 1 tsp of dried German chamomile flowers. Other investigations have demonstrated that chamomile has some antidepressant activity as well.

At home, you can make a strong brew with chamomile (commonly available at the supermarket). Add a little honey to taste if desired. For topical application, the essential oil of Roman chamomile in a 1% blend may be used to help calm even fractious infants.

Green tea is a rich source of theanine, an amino acid which can reduce markers of stress, and at the same time, seems to help with focus. Students who drink green tea generally have lower levels of stress than those drinking a placebo tea.

Note that this effect is only observed with low-caffeine green tea. 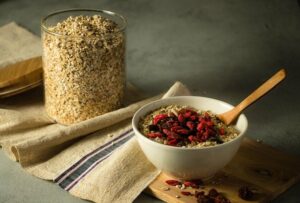 Did you know that your morning bowl of porridge (or muesli) may be setting you up to have a less stressful day! A warming bowl of cooked oats has nurture value, plus the carbohydrates in oats are complex and slow-burning, which may positively impact serotonin levels. Oats are also a source of tryptophan, a building block for serotonin.

Oats also contain avenanthramides, unique antioxidants which help to lower blood pressure by increasing nitric oxide levels. An added bonus is that oats may also support improved cognitive function, as well as modulating physiological response to a stressor. While the research used extracts of Avena sativa, because you can get oats from your pantry or supermarket we suggest adding oats to your breakfast!

Lastly, consider saying “no” to that extra drink. While one drink can relax some people, an extra one or two can make some people more anxious. Over-indulging and also contribute to problems in relationships, at work and with your health. Which will add to stress and anxiety. Limit your alcohol intake to not more than one a day for women, and a maximum of two for men.