All About Young Coconuts and How to Prepare Them 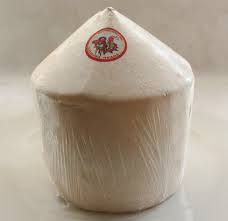 The young, unripe coconut is a fabulous addition to your diet.

Considered by some to be a “wonder food” fresh young cocnuts are readily available in the supermarkets in New Zealand – usually coming from Thailand.  They’re usually found in the fruit & vegetable aisle, near the pineapples and they are disguised as white-plastic-film-wrapped oddities.
While still on the palm tree, coconuts have a green husk –  this green part is removed for export.

Inside the young coconut is 700 mL or more of delicious coconut water, a low sugar, zero cholesterol, virtually zero fat drink that has a low glycaemic index (GI) and is high in electrolytes – especially magnesium, potassium and sodium. It also contains small amounts of vitamin C and some of the B-group vitamins. Coconut water has a number of naturally occurring enzymes which help with digestion and metabolism.

It is an excellent refreshing drink, especially good for sports people and those rehydrating after gastrointestinal upsets. It is far superior to using electrolyte additives.While coconut water is available as a canned drink be aware that it has been sterilised (by heating) and while the minerals will remain intact some of the heat-sensitive nutrients and all the enzymes will have been lost.

Here in New Zealand, you can enjoy fresh young coconuts pretty much all year round.

The Flesh of Fresh Young Coconuts

In contrast to the water, the fat and energy content of the coconut flesh (“meat”) is high; 100 g of the flesh provides about 354 calories – mainly from the fats and protein. But don’t get hung up on the fat content, as coconut has many bioactive compounds that are essential for good health. The important saturated fatty acid in coconuts is lauric acid (1:12 carbon fatty acid) – which increases the good (HDL) cholesterol levels in the blood. High HDL cholesterol has beneficial effects on the coronary arteries counteracting the “bad” LDL cholesterol and thus helps prevent vessel blockage (atherosclerosis).

The flesh is an excellent source of minerals such as copper, calcium, iron, manganese, magnesium, and zinc plus a very good source of B-complex vitamins.

During war-time, coconut water been used as blood replacement when nothing else was available. Subsequent to the success of administration of the water as an emergency treatment, a study done in 1956 found that the sterile nature of the fresh coconut water (an important point here is that the coconut must not be cracked or damaged), meant that – even in a culture medium – the coconut water did not grow any fungus or bacteria for the 10-days incubation (at body temperature).

In 1954 an experiment was conducted on 157 people in a surgical ward in Thailand – they were given IV coconut water and “there was no significant difference in the reaction rate between the group receiving untreated coconut water and those receiving infusions to which penicillin had been added.”

Another study – published in the American Journal of Emergency Medicine in 2001 – reported on the effect of coconut water on homestasis (equlibrium) as being equivalent to plasma.

Coconut water has also been pitched against water and a carbohydrate + electrolyte mix in cases of dehydration and coconut water came up trumps: “coconut water was significantly sweeter, caused less nausea, fullness and no stomach upset and was easier to consume larger volumes”.

How to choose your Baby Coconut

How to Open Fresh Young Coconuts

Cutting the husk off

If the top doesn’t pop open when you twist the knife you’ve either:
1.  Not removed enough of the fibrous husk, or
2.  Not pierced the shell with your knife.

As far as we could ascertain, no adverse reaction to consumption of coconut has ever been reported.  It is considered non-allergenic and safe in pregnancy, for infants and the infirm.

The biggest hazard presented by coconuts is being under one when it falls.  In fact about 150 people die every year from falling coconuts – that’s more than the death toll from shark attacks or lightning strikes.  But it hardly makes the news!

What does it Mean if I can’t Tolerate Coconut?

Most people tolerate coconut, but there are some specific reasons you might not. Firstly, a nut allergy doesn’t mean you can’t have coconut. In spite of the name, coconuts are not true nuts and a true allergy to coconut is rare. Having a reaction to the fat or oil of coconuts is the most likely problem. This can occur for any of a number of reasons: