Simply put, fibromyalgia is a syndrome with a constellation of symptoms, central of which is widespread body pain. Other symptoms can vary widely, with fatigue, sleep disturbances, headaches, digestive dysfunction, food intolerances, and more.

The cause of fibromyalgia is unknown. Some texts classify fibromyalgia as “myofascial pain syndrome”, but this is debated. When fibromyalgia was first identified, it was called “fibrositis” as it was believed to be an inflammatory condition affecting the soft, fibrous tissues in the body.  It is now very well established that inflammation (at least not the typical sort) is not a key component.

Effective treatments are lacking, with limited relief for some people from a cocktail of pain medicines, anti-epileptic drugs, sleeping pills, and anti-depressants. What are the Symptoms of Fibromyalgia?

Imagine feeling like your muscles are broken, damaged. But they aren’t. Imagine dealing with that every day. Most folk with fibromyalgia say that they simply ache all over.  All the time. Their muscles may feel like they have been pulled or overworked. Sometimes with muscle twitching, or a burning sensation. Some liken the aching to the intense, deep, relentless muscle pain of having influenza (the flu), except normal pain killers don’t do much for it.

On top of this, energy is elusive. Like being unplugged. For some this symptom might be fairly mild and in others it might be incapacitating. Why some people experience certain symptoms more strongly than others is also a mystery. There are a lot of overlaps between fibromyalgia and Chronic Fatigue Syndrome (CFS). The key differential symptom is that CFS is characterised by fatigue and fibromyalgia is characterised by chronic pain.

For some this is described as “brain fatigue” and others report it to be like having a “cotton wool brain”, creating somewhat cloudy thinking.

One of the theories is driven by the finding that those with fibromyalgia seem to be more sensitive to pain. It seems that parts of the brain that normally process pain exaggerate the sensations – creating higher levels of pain intensity compared to those who do not have fibromyalgia.

While the cause of fibromyalgia is unknown, a number of conditions appear to contribute to its development. Commonly implicated are poor sleep, repetitive strains, injury or mental stress. However, it is unclear as to whether these are actually the problem, or part of their reaction to those stressors.

Most people with fibromyalgia have a sleep disorder of some kind. Some have trouble getting to sleep with problems such as restless legs or sleep myoclonus (nighttime jerking of the arms and legs), or the constant pain, interfering with relaxation. For some it is frequent waking in the night. All in all, sleep is somewhat unrefreshing, which contributes to fatigue. 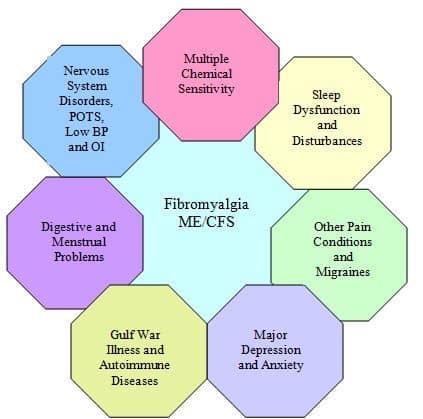 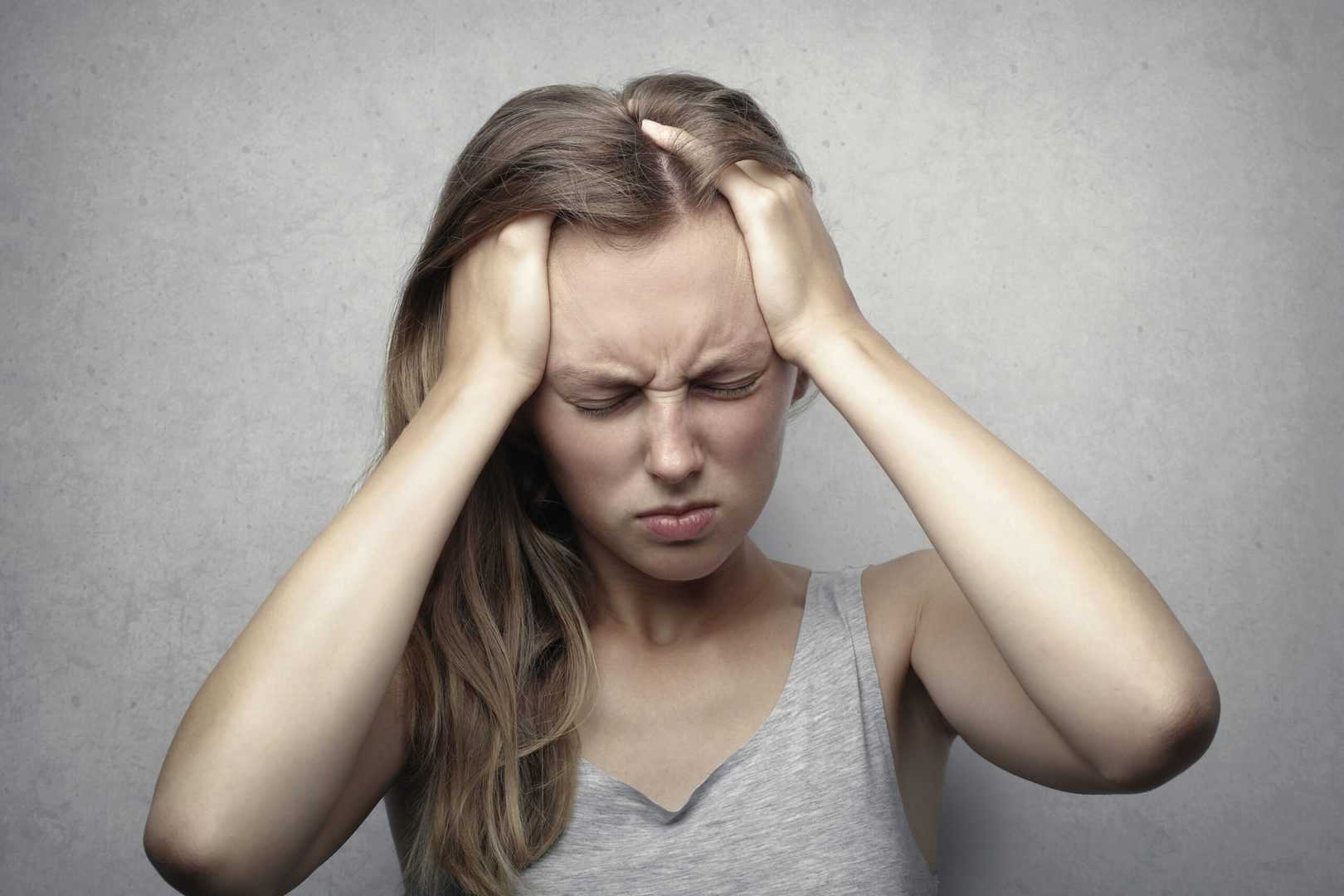 The relationship between IBS and fibromyalgia is well-known.

Generally, people with fibromyalgia are more likely to have irritable bowel than the general population. Typically, this is more in the constipation or mixed-pattern IBS. One study found that 98% of people with fibromyalgia had at least one of the functional gut disorders, which includes reflux, abdominal pain, gas/bloating, nausea as well as diarrhoea.  Click here to read more about  irritable bowel syndrome (IBS). Click the image to the right to read a research review article on this topic.

One study found that 100% of people with fibromyalgia were positive for small intestinal bacterial overgrowth (SIBO) on breath testing and that their pain was associated with the amount of hydrogen gas produced. The researchers went on to treat the SIBO and found their pain scores improved.

This topic is the focus of Sharon Erdrich‘s PhD research (via the University of Sydney) The FIDGIT Study: Investigating Relationships between Fibromyalgia, Digestion and the Gastrointestinal Tract. 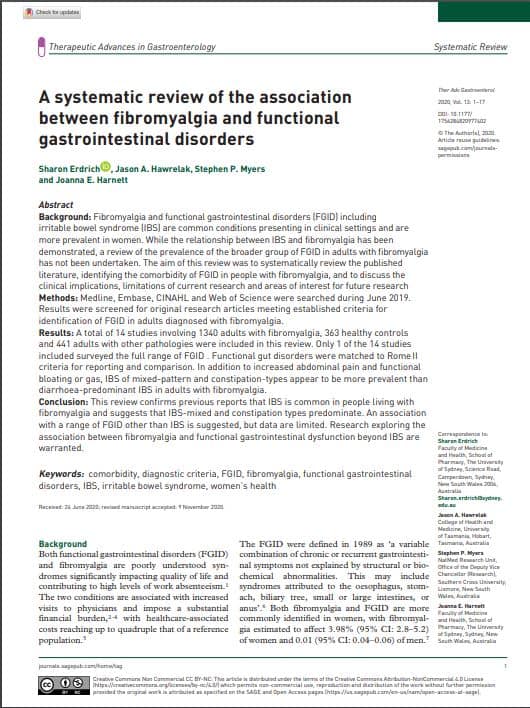 Please watch my short video about The FIDGIT Study

I personally welcome you to contribute to this research, and help women with fibromyalgia!

We will be recruiting participants as soon as we have raised enough money! 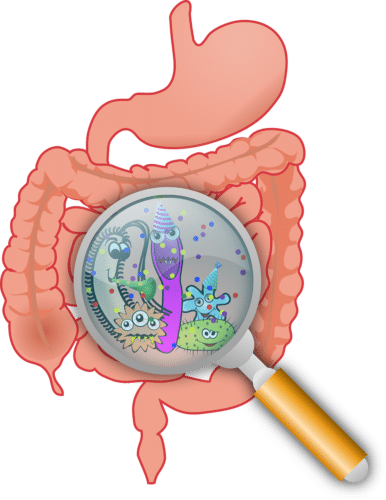 The Role of Gut Health and the Microbiome

Several studies have investigated various aspects of the function of the gut microbiota and have found higher cases of a range of conditions, from Helicobacter pylori (H.pylori), small intestinal bacterial overgrowth (SIBO), altered microbiome, increased intestinal permeability and so on. These studies are discussed in a comprehensive systematic review here 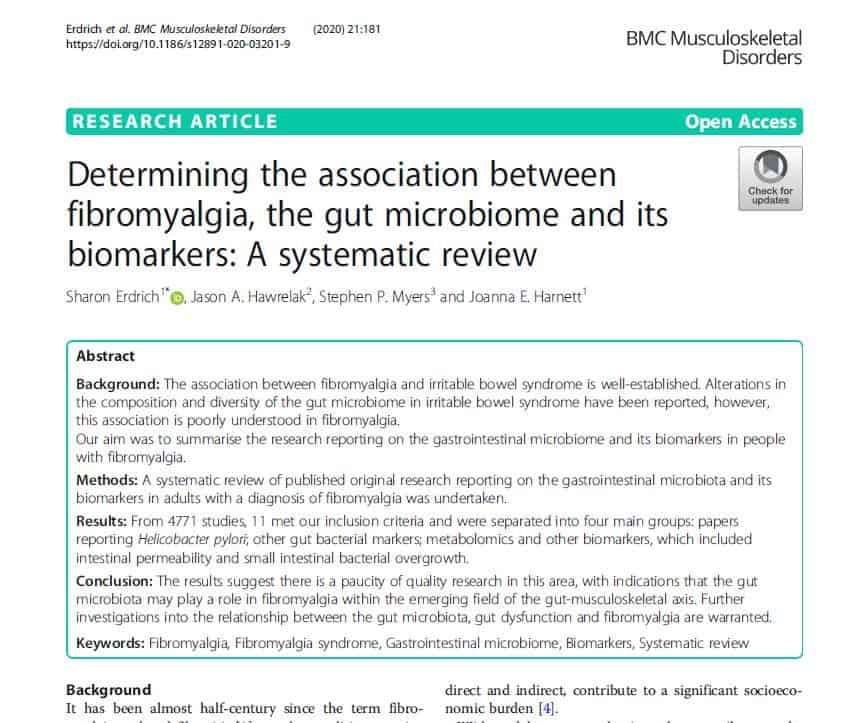 Medical management of fibromyalgia involves attempts to control or reduce symptoms. Often these are ineffective, or are difficult to tolerate due to side effects.

Fortunately, there are dietary and lifestyle interventions which are relatively simple to adopt and can help many people with fibro.  Key strategies include exercise, stress reduction, mindfulness practices as well as personalised natural medicine, aimed to address contributing factors, such as healthy digestive function, a robust microbiome, and so on.

Key considerations for anyone with fibromyalgia include:

Through adopting a personalised approach symptoms may be reduced and quality of life improved for everyone suffering from this condition.