Answer the Following Questions about your Bowel & Pain Symptoms

If you answered YES to number 1, and to at least two from number 2-4, then you may have Irritable Bowel Syndrome (IBS).

To confirm this, it is important that other causes for your irritable bowel habits have been ruled out.

Who Gets Irritable Bowel Syndrome (IBS)?

Women are affected three times more likely to suffer with IBS than men. It commonly begins in one’s teens or early adulthood. Symptoms can seem like some other problems (such as endometriosis) and misdiagnosis is common.

Irritable bowel syndrome should really be renamed “irritable bowel symptoms“, as it is recognised to be exacerbated by a number of stimuli. For some people it is triggered by foods such as wheat, dairy products (although often yoghurt is OK), citrus fruit, tea, coffee and alcohol and more. An imbalance in the normal intestinal bacteria (dysbiosis), caused by a previous round of antibiotics or a viral, bacterial or parasitic infection can lead to inflammation and spasm of IBS. Anxiety and stress reactions also seem to be strongly associated.

During symptomatic episodes the digestive tract may contract excessively, creating abnormal bowel function. Pain is often crampy, caused by strong contractions of the large intestine, coupled with a heightened sensitivity of pain receptor nerves in the small intestine.

Breath testing can determine the role of excessive bacteria in the small intestine (SIBO) or the role of undigested sugars such as lactose and/or fructose.

What can I do to Help my Irritable Bowel Syndrome (IBS)?

Hypersensitivity in IBS sufferers contributes to a heightened perception of pain. A healthy gut produces natural factors that help with sensitivity. For example, strains of Lactobacillus act on opioid receptors in the cells that line the intestine and help to bring pain relief. When constipation is a problem, probiotic organisms can increase stool frequency and also reduce moderate to severe abdominal pain and bloating.

Additionally, recent research has made a very strong connection between excess hydrogen-gas production in cases of diarrhoea-predominant IBS (who tend to experience more pain) and excessive production of methane gas in those with constipation-dominant IBS. Both of these situations are accurately evaluated with a SIBO-breath test.

Herbs can also be used to nourish and relax the nervous system and reduce stress and anxiety responses. Your herbalist may choose ones that have a specific benefit to the gut as well, such as Chamomile (Matricaria recutita), which is well known for soothing the gut and as a nervous system relaxant and tonic.

Symptoms of IBS can be successfully supported and eased with natural approaches. Reducing stress, testing for SIBO, lactose intolerance or fructose malabsorption are important first steps. Dietary changes, supplements and herbal remedies as prescribed by your health consultant are important to help soothe and heal the gut.

Generally, however, food is NOT the problem. Food aggravates the problem!

We aim to help you!

Foods are often contributing to, or worsening your symptoms.  Other than those mentioned above, you might have some that are  especially problematic for you.

It is reassuring to know that the development of allergies in a person who was previously not allergic to food is extremely uncommon. Reactions to foods that you used to eat without problems is an important clue for us in determining what’s beneath your digestive disorder.

What is far more common is food intolerances. For example, you may notice you are better if you avoid some of the foods identified as “high FODMAP” on the table. However, it is not recommended to follow this diet for longer than about six weeks, as it eliminates important nutrients for a healthy gut.

If you notice your symptoms improve with such restrictions, or by restricting starches and carbs, we recommend ruling out small intestinal bacterial overgrowth (SIBO), fructose malabsorption, or lactose intolerance. At House of Health’s breath testing service, we can also assess your tolerance of polyols. 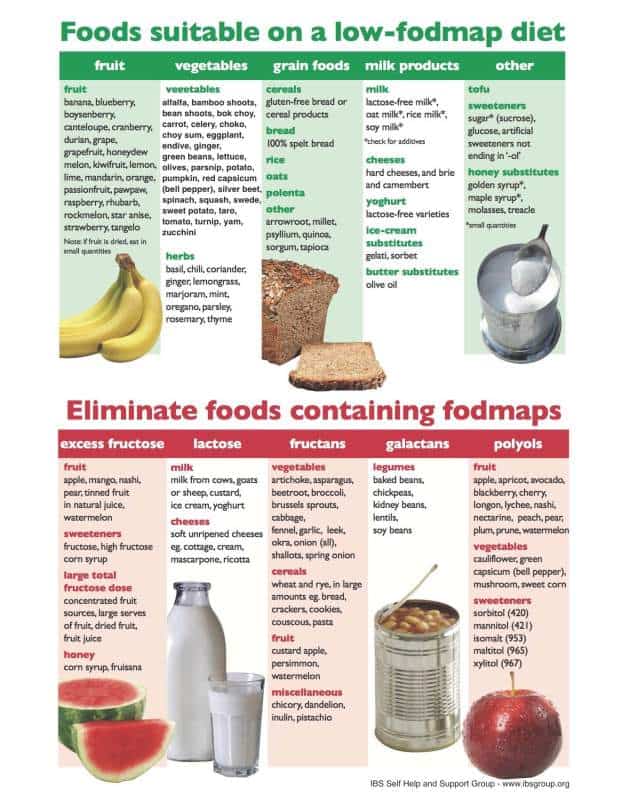 A low FODMAP diet is often recommended for IBS. It sometimes helps.

However, if you have always had allergic reactions read more about the different types of allergies and the various methods of identifying them. We recommend blood-based food intolerance testing using robust ELISA methodology.

Once your problem foods have been identified we will work through a plan with you.

GET TESTED FOR SIBO

GET TESTED FOR FOOD INTOLERANCES

GET TESTED FOR LACTOSE INTOLERANCE

GET TESTED FOR FRUCTOSE MALABSORPTION

What other Natural Options can Help Irritable Bowel Syndrome (IBS)?

In addition to following the dietary advice of your practitioner, certain herbs that are effective in soothing inflammation and pain in the gastrointestinal tract may be prescribed to alleviate the symptoms of Irritable Bowel Syndrome. It is also important to stimulate the digestive juices of the stomach, liver and gallbladder to support optimal digestion.

These can be components of a herbal formula or can also be taken as teas. There are many other herbs that might be used – your naturopath will select those that are most suitable for you based on your Irritable Bowel Syndrome symptoms and other factors.

Because the nervous system drives many of the things that happen in our digestive system, it’s important to consider the effect of your stress levels, tendency to worry and other lifestyle factors, as possible contributors to IBS symptoms. This is truly the value of a holistic approach. Considering the interconnectedness of mind and body is important. Read our article Nine Simple Home Remedies for Anxiety that you can try at home.

Our qualified practitioners have a range of effective ways to support your stress management and counteract anxiety – read about them here.