Allergies and food intolerances disrupt people’s lives and can make you miserable.

The long-term consequences of undiagnosed and untreated allergies include just about anything due to the constantly elevated level of inflammation and the generation of free radicals that damage tissues and organs. In addition, people with allergies are more likely to develop more allergies, increasing the misery and the long-term health risks.

What is an allergy?

Allergies occur when the body’s immune system (which has the important role of protecting us from foreign invaders) reacts to non-threatening substances such as food or pollen, as if they were harmful. This can cause chemical reactions in the body which sufferers experience as unpleasant (and sometimes life-threatening) symptoms.

True Food Allergy, is an immediate IgE-mediated reaction, and can constitute a medical emergency when activated. A small protein particle (called an allergen) is responsible for triggering the antibody response – this causes mast cells to release histamine, resulting in tissue inflammation and swelling. The antibody called Immunoglobulin E (IgE) accounts for 90% of true food allergic reactions. A reaction can occur even to tiny traces of the offending allergen and in exquisitely sensitive individuals, even airborne food allergens can trigger anaphylaxis – this is most commonly known in relationship to peanut allergy.

Classical IgE-mediated food allergy can present with immediate red skin rashes, swelling of the face and neck and even anaphylaxis with shock and circulatory collapse. In adults, the foods most commonly implicated in anaphylaxis are wheat, soy, milk, peanuts, tree nuts, shellfish, fish and egg (white).

Exacerbations of eczema and rhinitis can occur in food allergy. Vomiting and diarrhoea, oesophagitis can also occur. Frequently patients think they are allergic to one food but may actually be allergic to three or more foods.

Oral Allergy Syndrome occurs when allergic reaction is localised to the mouth and throat and is triggered by fruit and vegetables such as apple, peach, celery, tomato and cherry.

Delayed T-cell mediated food allergic reactions are typically seen with contact dermatitis and Coeliac Disease – these take 24 hours or more to evolve. These types of reactions do not involve IgE antibodies. IgG-mediated reactions are very common and usually undiagnosed. Research has confirmed a connection between IgG or delayed allergy and inflammatory bowel conditions such as Irritable Bowel Syndrome. (P IgG antibodies can be measured to identify the specific foods implicated.

Food Intolerance is an adverse reaction that does not involved the immune system. Reactions are dose-dependant – smaller amounts of the offending food may be tolerated, but at a certain dietary threshold a reaction will occur.

There are a number of different reasons food intolerance can occur. For example, a deficiency in a digestive enzyme such as lactase results in lactose (milk sugar) intolerance. When lactase (the enzyme that enables us to digest lactose) is depleted the result can be cramping, flatulence and frothy diarrhoea after drinking cows milk, or more moderate symptoms from smaller doses of lactose (such as from milk r milk powder added to many bread products). It can affect up to 20% of the population, often begins in teenage years and gets worse with advancing age. Lactose intolerance is more common in Asians, African, Hispanic and Mediterranean populations. This kind of food intolerance is best managed by avoiding the food or taking a dietary supplement that contains the missing enzyme.

Intolerance to sucrose in table sugar and fruit can lead to similar symptoms if there is a deficiency of the intestinal enzyme which breaks sucrose down to absorbable fructose and glucose.

For some people, the types of foods causing reactions seems vast. Common examples include apples, onions, beans (such as kidney beans), whole grains, some nuts and so on. For many people the problem lies in the digestive system itself, rather than the food. Read more here.

Some foods naturally contain high levels of a potentially problematic molecules, called amines. The most 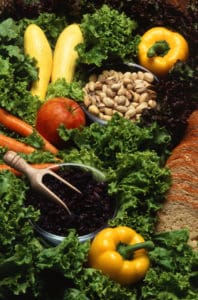 Even good food can cause unwelcome reactions

common of these is histamine. Examples of foods high in histamine include eggs, nuts, olives, alcohol, seafood, aged cheeses, some vinegars, processed or aged meat and fermented foods. Reactions are varied – from digestive disturbance to sinus or throat symptoms, skin rashes (commonly red and itchy) and headaches. Read more about histamine intolerance here.

Food Toxic reactions have no immune basis, but are due to bacterial endotoxins and contaminants. This results in vomiting, diarrhoea, flushing and certain neurological symptoms in all individuals who consume the food.

Other biologically active toxins include algae that infest shellfish with paralytic neurotoxins, glyco-alkaloids in potatoes and amatoxin in mushrooms. Mycotoxins in grain produce such as wheat, rye, barley and oats can cause Ergotism with gangrene and convulsions. Scromboid toxicity occurs when fish putrefies and releases histamine causing allergy-like reactions.

Food additives such as colourants and preservatives may trigger pseudo-allergic reactions. These are not IgE mediated, but possibly involve direct Mast Cell and Basophil Histamine Release. Histamine may even occur naturally in foods and when absorbed in the GI tract, the histamine content triggers an allergic-like reaction. A similar reaction can also be seen with naturally occurring dietary salicylate in aspirin-sensitive people. Other chemicals found in food can cause ill effects such as caffeine induced palpitations. Capsaicin in chilli’s induces a typical “hot curry” burning oral sensation, and alcohol-induced flushing and nasal congestion is due to local vasodilatation.

As detailed above, an allergy is mediated by the immune system, and markers for such reactions can be measured in the blood. Allergy diagnosis is best made by your doctor or allergy specialist. An intolerance is often completely confined to within the gastro-intestinal tract and thus is NOT detectable by a blood test. The gold standard for this kind of problem is elimination and provocation testing.

There seems to be so many people offering all kinds of tests available to detect food allergies that it can be very difficult to know where to start. Your doctor or allergy specialist will use some tests to assess immediate (IgE) allergies, however this can inconclusive due to the wide variety of possible reactions.

The SKIN PRICK test: this test is available at the lab (you can request via your doctor or we can arrange this for you). The test involves using a small needle to prick the skin and introduce a drop of fluid containing a known allergen. The reaction – noted within the next half hour will help identify reactions that provoke a histamine release to a limited number of allergens. The usual substances tested include dust mites, animal hair, various pollens and highly suspect foods. However, not all food allergies will show up here as a) the antibodies are not so concentrated in the skin and b) not all allergic reactions are immediate.

The standard BLOOD TEST: A single measure of IgE in the blood is a fair indicator of an IgE-mediated response, but does not pinpoint the culprit. If this is elevated or it’s decided to verify specific reactions, a sample of your blood is taken and sent to the laboratory for what is known as the ‘RAST’ (Radio AllergoSorbent Test). This measures the amount of specific IgE antibodies (which trigger a histamine release) in your blood to various environmental and food allergens. House dust mite IgE will be raised if you have an allergy to house dust mites and the result is then graded, depending on the level of that particular IgE in the blood. Over 400 different allergens can be tested for in this way, but usually only half a dozen or so of the most likely culprits are tested due to the cost – between $24 and $30 for each item tested.

The ELIMINATION AND CHALLENGE TEST: Considered by allergists to be the “gold standard” – the diets is reduced down to a minimal “low-reactive” diet until symptoms have abated. Then foods get gradually reintroduced in a controlled manner and symptoms are noted. This method is very effective but is also very difficult to comply with and can take many months to test all foods.

At HOUSE OF HEALTH we can guide you through the Elimination & Challenge test, providing comprehensive support as you go through the process. We also offer a comprehensive medical blood test that is sent to a laboratory in the United States for IgE and IgG antibodies to at least 96 different foods. Options are outlined here. However, in our experience, the test results can mislead you into believing that the food is the problem, when in reality it tends to be the digestive system (except for immediate onset, IgE reactions) that is the issue.

Some practitioners perform tests that have not been shown to have an acceptable degree of diagnostic reliability on repeated testing. They shouldn’t be relied on for allergy diagnostic purposes as they are of an inferior nature according to the British Society for Allergy and Clinical Immunology.

VEGA testing involves the measurement of disordered electromagnetic currents in the body to certain substances. Results are very unreliable according to the British Medical Journal.

APPLIED KINESIOLOGY tests muscle strength in the presence of various allergens, with a loss of strength indicating an allergy. This test is equally unreliable according to the British Society for Allergy and Clinical Immunology. However, in some cases, with a very experienced practitioner, we believe that this method may be of value.

HAIR ANALYSIS involves testing a hair sample in either a VEGA or EAV machine, testing for energy fluctuations according to various substances. These methods have been assessed and found to be unreliable allergy tests.

PULSE testing involves counting the pulse rate, ingesting a food substance and noting any difference in the pulse rate 10-20 minutes later. This is incredibly unreliable due to the fact that there are so many factors that affect pulse rate, not least of which is the digestive process itself!

The Nutron and ALCAT tests (also known as leucocytotoxic tests) measure cellular changes in the blood after introduction of various food allergens. These tests had a poor reliability for diagnosing allergies when they were subjected to clinical trials according to the European Academy for Allergology and Clinical Immunology.

What Can I Do?

So, you think (or know) you have a food intolerance – it’s time to contact us. We will take a full clinical history from you including your symptoms, details of when they occur and any other relevant information. Some food-related problems can be pinpointed without any further testing. We will then be able to offer you advice requiring diagnostic testing and support options to help minimise your symptoms, plus dietary and other practical advice.